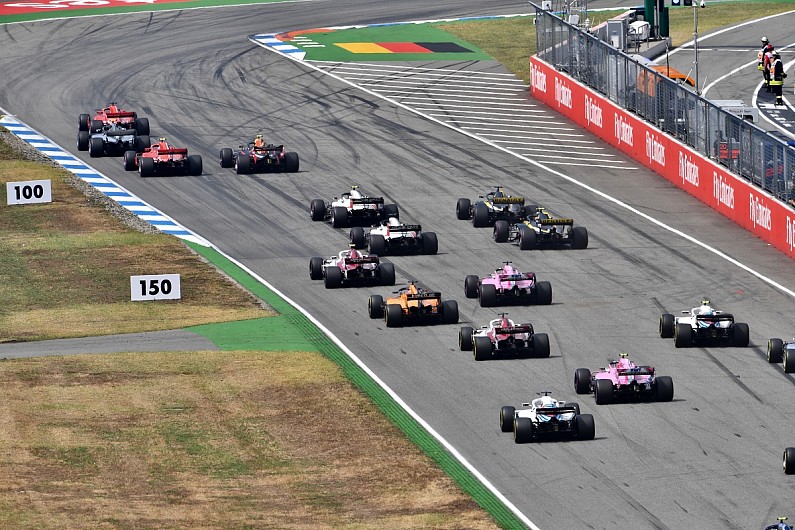 Motorsport is car or bike technology combined with driver skills and driver mentality to be able to win races and a championship. MotoGP races often show how exciting it can be. Close racing and the smaller bikes make overtaking possible on circuits where cars have problems.

With small differences between race cars overtaking becomes very hard. Even for rich teams who have cars that are better than those of low budget teams and having the best drivers in their cars, overtaking is not only sometimes impossible, it is also dangerous and leads to crashes. Drivers in the top of the rankings must decide between stay safe and score points or try to overtake and accept a crash and scoring no points.

This is why the spectators on the circuit and in front of the television don’t see much action, often it is a train of race cars driving towards the finish line. When the fastest cars from qualification are at the front of the grid the following order of a race is pretty much organized before the start. The start is often the most exciting part of the race and after that it becomes boring. A change of positions after pit stops is not an overtaking manoeuvre. There was no real close racing and a direct overtaking action on the race track.

When drivers are racing against each other on a traditional race circuit blocking in the brake zone is very common, but this leads often to (very) dangerous situations. Therefor it could also be out of safety reasons an argument to use a Tracksplit and begin with Tracksplit car racing.

A circuit with a Tracksplit gives race cars the space they need for overtaking. Still it won’t be easy to do, since the driver in front does not need to defend but can concentrate on a fast and clean drive thru the Tracksplit. If the distance between two cars is too big, overtaking will not be possible. As it is today the cars need to be following each other within less than a second to be able to overtake.
Close racing is granted and overtaking possible. Than the blue flag maybe could become superfluous.

An idea out of the box

The characteristics of the circuits are one reason why overtaking is so difficult, the other reason is the regulations of the technical developments causing an equal performance of nearly all cars. To keep the sport series affordable some organizations have limitations to reduce the development costs of the cars: limitation on engine developments, uniform tires, limitations on aerodynamics or a standard chassis.

Modern carbon brakes and very good tires allow drivers to brake very late compared to steel brakes and make overtaking under braking also very hard. Some circuits now have 1, maybe 2 places where overtaking is possible, some have none.

Overtaking is possible when the track is wide enough, so the competitors can drive next to each other. Due to a higher speed or by braking later and harder than the competitor before going into a turn. But ongoing into the race driving out of the ideal line becomes much harder because there is much more dirt, dust and loose rubber on the track. If a driver wants to overtake he often needs to drive next to the ideal line onto the dirty part of the track where he then picks up dirt on his tires and his speed is reduced and he cannot overtake anymore. Often a driver has to wait until the driver in front of him makes a mistake.

The characteristics of a race track will have at a certain part of the circuit a split of the track into 2 separated lanes. These 2 lanes need to be absolute equal and equal fast. The distance and the turn pattern of the 2 lanes need to be exactly the same, so it makes no difference for the driver which lane he takes.

The length of a Tracksplit is not important but could be 20 to 500 and more meters long and the model depends on the space that is available on each circuit. Obvious is to look at current chicanes on a circuit for a realistic and easy to implement Tracksplit opportunity.

It is possible to have 1 or more Tracksplit’s on a circuit and this depends on the length of the circuit and what kind of races they organize on each circuit.

Each Tracksplit needs to be designed so it is survey-able for the drivers and dangerous situations can be avoided.

To reduce the risks that cars touch driving towards and out of a Tracksplit there should be white lines on the track, like it is common at the entrance and exit of a pit lane with a penalty for toching and crossing the line.

There are no losers with Tracksplit only winners:

Many race car drivers show regularly that it is possible to fight for a top position although they have to start at the back of the grid.

They need the best cars, best engineers, best mechanics, best strategy and last but most important the driver who is able to do it; the driver needs the skills to manage everything; manage the car and tires, don’t crash, know how to prepare an overtake action and have the courage to overtake fast and precise.

Gladiators wo win races with their skills to drive fast, overtake, manage car, tires and brakes

The way it works

The race will show a different picture. The faster cars and the better drivers will always be able to drive to the top positions in a race. Sub top drivers will be in the mid field and the slower drivers will be at the back of the field, independent from the starting position. But all the drivers will have to fight for their position with the competition on the same level. This is the beautiful and magnificent result of races with a Tracksplit; the better teams and drivers will nearly always have to fight with their biggest competitor for the victory. The whole race will be more attractive with fights for nearly every position, because the Tracksplit makes an attempt to overtake possible.

With a Tracksplit the frequency of overtaking or a try to overtake during car motor sport races will increase substantially. During a race all equal fast race cars will be in a fight for the best position. The more equal the cars and drivers, fights and close racing actions will be granted even with the best drivers at the front of the starting grid.

Having race series that give teams and engineers more room for innovations and less strict budget rules, can even increase the show. Than a reversed starting grid could be part of the Tracksplit car race, resulting in heroic events.

A track record rally in an elimination race of 3 rounds:

Round 1: The fastest time of 1 lap determines the score in the first round is. All drivers can try to drive their fastest lap during 15 minutes. The fastest 16 drivers go into the next round.

Round 3: In the final round the total time of two unbroken laps determine the drivers result and the driver needs to use both sides of the Tracksplit during the run of 2 unbroken laps. The remaining 8 drivers can try to drive their 2 unbroken fastest laps during 20 minutes.

This results the drivers and teams preparing the cars for driving the ultimate fastest laps.

The championship winner: is the driver with the highest amount of points from the “track record rally” + “the race” + “the fastest lap” + “the position wins”.

Guess who wins the championship. Analysis of race seasons show the same winners!

In motorsports and sport in general, every once in a while there is a team or player the best for…

F1 race Monza 2020 celebrated as victory for Formula One

“Monza result ‘a loss for Mercedes but a victory for Formula 1’. I think it is so refreshing to see…

The attraction of Tracksplit car racing with a reserved starting grid

F1: Position wins of the winner from start to finish during last race

F1: Average position wins of the winners from start to finish during the season races

F1: Number of drivers on 1 or more laps at finish of the last race

F1: Average number of drivers on 1 or more laps at finish during the season races

Send us a message